On 18th November, Chief Executive Officer at the Chamber, Debbie Bryce, signed the Covenant during the first-ever online signing ceremony in Wales. By signing the covenant, the Chamber has shown its commitment to treating those who serve or have served in the Armed Forces, and their families, with respect and fairness.

The event was attended by Colonel Nick Lock OBE, Deputy Commander Headquarters 160th, (Welsh) Brigade, who spoke about Reserve Forces' & Cadets' Association (RFCA) For Wales and the importance of the Armed Forces Covenant. The Covenant represents a promise by the Nation that those who serve or have served in the Armed Forces, and their families, are treated fairly.

By becoming a Force’s friendly employer, businesses can benefit from the wide range of unique skills and experiences that reservists and veterans, spouses and partners can bring to their organisation. Employing Armed Forces community members can help diversify the talent in business’ workforce.

The Chamber signed the Armed Forces Covenant, pledging their support to the “Armed Forces Family” and strengthened their relationship with Strategic Partner RFCA For Wales.

Tony Fish, Regional Employer Engagement Director (North Wales) at RFCA For Wales, spoke to attendees ahead of the covenant signing about its importance and highlighted the Employer Recognition Scheme in place for those that pledge to support the Armed Forces Family.

“As Strategic Members of the Chamber, we are grateful for the support Debbie and her team have shown to the Covenant and the opportunity for us to promote this to other Chamber members, many of which are already Covenant signees.” said Tony.

“This is a very significant signing and is, in fact, the first ‘Virtual’ Armed Forces Covenant signing in Wales to be undertaken.”

Tony then introduced Colonel Nick Lock OBE, who officiated the ceremony. Before the signing, Colonel Nick gave attendees an insight into his 30-year service in the Armed Forces and also highlighted the military operations that have taken place across Wales to combat the Coronavirus outbreak.

Said Debbie, Chief Executive Officer at the Chamber, “We are both delighted and proud to sign the pledge and receive the bronze award in recognition of our commitment to the scheme. As part of our commitment, we would encourage employers to support and hope we inspire our members to do the same.”

“Signing the pledge brings a variety of positive outcomes to any organisation who wants to get involved, it enhances a workforce not only with skills but it also shows a commitment to the local community, and it gives something back to those who so bravely give their lives for our freedom and safety”.

Phill Jones, Chair of the Chamber, said upon the completion of the signing; “Today was a special occasion to witness the signing of the Armed Forces Covenant. As an RAF veteran myself, and with my recruitment background, it is important to honour the UK’s Armed forces and show our commitment to the armed forces personnel.”

He continued, “Reservists and veterans have a host of skills to bring to the workplace, but sometimes, they need a little extra support or helping hand during the transition to the civilian career ladder. The covenant established how they should expect to be treated and the West Cheshire and North Wales Chamber are very proud to be involved.”

Businesses and charitable organisations of all sizes can sign the covenant and show their support to the Armed Forces Family. Employers can benefit from the wide range of unique skills and experiences reservists, veterans, spouses and partners can bring to organisations. Find out more about the Armed Forces Covenant on their website www.armedforcescovenant.gov.uk. 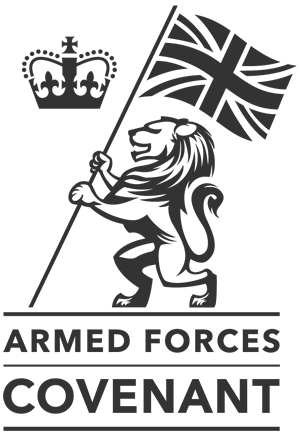